The Truth about Temptation 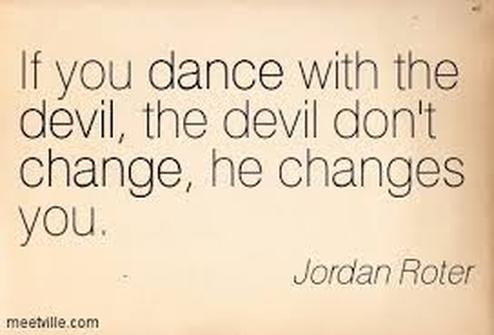 Once up a time, in the land of good, not perfect, vs. evil, there was a power struggle. Last week, I wrestled with myself about a decision to do something nice for someone that they saw as an obligation. Let’s be clear, I am NOT obligated to this person in any way, but when someone has entitlement issues, they think that the entire world owes them and that they are indebted only to themselves. Sometimes we may find ourselves doing certain things just to “keep peace” although we may feel a bit uncertain. It’s important to listen to the still small voice inside because it’s usually correct. The other day I explained that Satan is the accuser. He will try to convince you that you are wrong and they are right. Satan is manipulative, so he is determined to persuade you that your obligation to him is ongoing. Last week, I was bombarded with a specific hidden agenda. I fulfilled my promise because I wanted to be the bigger person by showing them my heart of diplomacy. Unfortunately, you cannot negotiate with the devil. He has a way of twisting a situation around to benefit his mission. He shows up at the right time to ensure a favorable result. He knew exactly what to say, but something about his energy was off. We must always remember that the devil is and will always be a liar. Beyond his name, you really can’t believe too much else that he says. When a person is not telling the truth, most of the time it shows in their eyes. The actions of a liar totally contradict everything that he’s previously told you. He became cold. Usually the representative doesn’t stick around too long because the energy that it takes to carry out the attack becomes overwhelming. As the scheme began to unfold, I paid more attention to the actions of this individual and it became painfully apparent that the plot was destructive. Unfortunately, there will be some collateral damage. There are times when we will wonder why we fell for a similar, if not the same scheme again. It seems like every time you move forward, the devil will attempt to throw you off course so that you will forfeit your destiny. Every, single time they come into your atmosphere negativity and destruction seems to follow. It’s funny how your peace is somehow disturbed. This person is the perfect definition of a “dark cloud”. They live to rob you of your joy. Honestly, the spirit in them can’t be sugar coated. They truly are pure evil, this is why the spirit in them hates the spirit in you so bad. The one and only reason they ever proclaimed to ever care about you was for the purpose of getting close enough to you to destroy you. The devil makes unfulfilled promises with the ultimate goal of betraying you from the very beginning. The devil knows your value, this is why he works so hard to destroy your self-image. Remember, he roams to and fro seeking whom he can devour, so he will weave in and out of people’s lives leaving remnants of calamity and untruths everywhere he goes. Don’t be fooled by the extremity of the description. There are some predators lurking around searching for the next victim to destroy. If you do a quick assessment of their background, you will find that they have been on a path of destruction for most of their life.  Believe me, the people closest to them know all about the tactics of the individual, they just found a way to deal with him with a hands off approach and stay out of the line of fire. They’ve covered up his lies, made excuses for his behavior, and fostered his dysfunction. In a round-about kind of way, they’ve even warned you but you didn’t take heed the first time. The beauty of the revelation is that every single plot that the devil devised was uncovered. Once the mask came off, pure, unadulterated, evil reared his ugly head. We have a responsibility to stop dancing with the devil. You will never be in sync, not to mention, you don’t dance to the same beat. The moral of the story is, be careful who you let into your head, your heart and your house. Sometimes it’s easy to let them in, but almost impossible to get them out!

James 4:7-Submit therefore to God. Resist the devil and he will flee from you.