No Justice . . . .St. Louis Protesters Clash With Police In Second Night Of Unrest 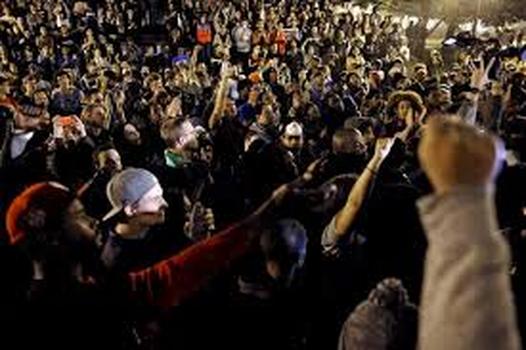 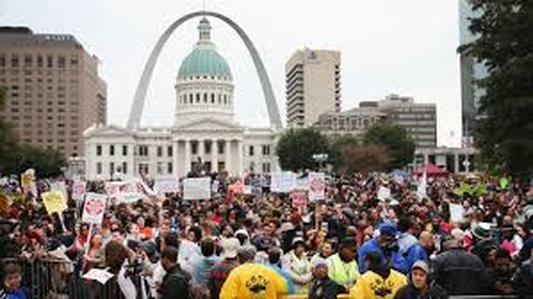 (Updates with detail from protest, comments from police chief)

ST LOUIS, Mo. Oct 9 (Reuters) - Police clashed with protesters in St. Louis on Thursday for a second night after an officer killed a black teenager, ahead of a weekend of planned rallies in the area over the August killing of unarmed black teenager Michael Brown.

Throughout the night, as many as 400 demonstrators spread out across several city blocks in south St. Louis, angrily shouting and chanting at rows of police officers, many of whom were clad in riot gear.

Dozens of protesters had met earlier at the site in the Shaw neighborhood where 18-year-old Vonderrit Myers Jr. was shot dead on Wednesday by an off-duty white officer working for a private security firm in what police described as a firefight.

But demonstrations grew increasingly chaotic. At one point early on Friday morning, a line of police pushed towards a group of several dozen protesters who jeered and cursed at them, pepper-spraying those who refused to disperse.

St. Louis Police Chief Sam Dotson told local television station Fox 2 that at one point during the tense protest, someone behind the massive crowd threw a knife that struck an officer's body vest at the shoulder.

He added that a police car and several businesses and residences had been damaged and that U.S. flags were burned. Two people had been arrested by midnight local time, Dotson said, during which one officer suffered minor injuries.

The St. Louis area is bracing for further unrest over the killing of Brown by a white police officer two months ago, with Myers' death on Wednesday expected to add fuel to the fire.

Several civil rights organizations and protest groups, including Hands Up United, planned to mark the weekend with marches and rallies in St. Louis and the suburb of Ferguson, Missouri, where Brown was killed.

The groups are demanding the arrest of the officer who killed Brown, and want to draw attention to police treatment of black Americans. Protest organizers said they are planning only peaceful activities, but fear that Wednesday's killing of the black teen might trigger violent outbursts.

"We never advocate violence ... But I do know that people were angry last night and they will be out this weekend," said Tory Russell, a leader of Hands Up United. "I don't know what they are going to do."

At least 6,000 have registered on an organizing website for the "weekend of resistance" events in and around Ferguson, which kick off on Friday with a "Justice Now" march to the office of St. Louis County Prosecutor Bob McCulloch.

The weekend is to be capped with actions of "civil disobedience" on Monday.

Organizers said they are also planning to create a "memory altar" to victims of police violence and to hold a candlelight march carrying a coffin to the Ferguson Police Department.

"There are a lot of people coming into town," said Knowles. "We are going to be prepared. There is intel out there that there are people wanting to do bad things. And people who want to cause a problem are going to use that (the shooting on Wednesday) as a rallying cry," he said.

The police department would not identify the 32-year-old officer who shot Myers. Police said Myers fired multiple times at the officer, before the officer returned 17 shots and fatally wounded him.

The officer was not hurt and was placed on administrative leave as the shooting is investigated, police said.

Relatives of Myers said he did not have a gun, the St. Louis Post-Dispatch reported.

The shooting sparked protests that raged until dawn on Thursday. One person was arrested and several police vehicles were damaged in the unrest, police officials said. (Reporting by Carey Gillam in Kansas City, Mo.; Editing by Catherine Evans)