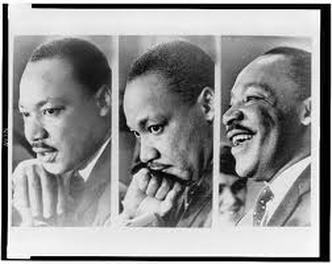 3.) He almost didn’t become a minister.  After graduating from college, he still had serious doubts about Christianity and the Bible and told his father (who was a Baptist minister, as his grandfather had also been) that he didn’t want to be a minister and instead was considering becoming a doctor or a lawyer.  He later decided that the Bible had “many profound truths which one cannot escape” and chose to become a minister, entering seminary at Crozer Theological Seminary in Pennsylvania.  He graduated with his PhD at the age of 25.

4.) Although King today is often remembered as being an amazing public speaker, he got a C in public speaking during his first year at seminary.  This likely isn’t because he was actually bad at public speaking at this point.  His father noted that even before going to seminary King Jr. was one of the best public speakers he’d seen.  Whatever caused his professor to give him a C, by his final year King had straight A’s, was the valedictorian of his class, and the student body president.

5.) King convinced “Uhura” on Star Trek, Nichelle Nichols (who incidentally later went on to work for NASA), to continue on with the role after the first season. Nichols stated he told her not to leave the show because she was not only playing a black person as a main character on TV, but she was also playing a character that didn’t conform to the stereotypical black person of the day, usually portrayed.  Rather, Uhura was portrayed as an intelligent member of the crew and an equal to those around her.

6.) King is to date the youngest male to win a Nobel Peace Prize, winning it in 1964 at the age of 35 (at the time he was the youngest overall for the Peace Prize).  The youngest ever to win the Peace prize today is Tawakkol Karman of Yemen who was just 32 when she won the prize in 2011.

7.) King donated all of the $54,123 (about $400,000 today) he received for his Nobel Peace Prize to the Civil Rights movement.  During his acceptance speech, he stated “I believe that unarmed truth and unconditional love will have the final word in reality. This is why right temporarily defeated is stronger than evil triumphant.”

8.)  King won a Grammy and was awarded a Congressional Gold Medal and a Medal of Freedom.  The Medal of Freedom and the Gold Medal make sense, but how on Earth did he win a Grammy, you say?  He won it in 1971 for Best Spoken Word Album for “Why I Oppose the War in Vietnam”.

9.) His house was once bombed.  This was during the Montgomery Bus Boycott, which lasted a total of 385 days

10.) His mother, Alberta Williams King, was also murdered.  She was killed while attending church in Atlanta in 1974 by a 23 year old man, Marcus Wayne Chenault, who believed “all Christians are my enemies”.  He shot and killed her while she was playing organ at the church.

11.) King Jr.’s autopsy revealed that stress had taken a major toll on his body.  Despite being just 39 at the time of his death, one of the doctors noted that he had “the heart of a 60 year old”.

13.) His “I Have a Dream” speech painted an even bigger target before on his back, not just with certain people in the general public, but with the FBI.  This was a memo circulated throughout the FBI offices after the speech:

In the light of King’s powerful demagogic speech yesterday he stands heads and shoulders over all other Negro leaders put together when it comes to influencing great masses of Negros. We must mark him now, if we have not done so before, as the most dangerous Negro of the future in this nation from the standpoint of communism, the Negro, and national security.
http://www.todayifoundout.com/index.php/2013/01/martin-luther-king-jr-facts/