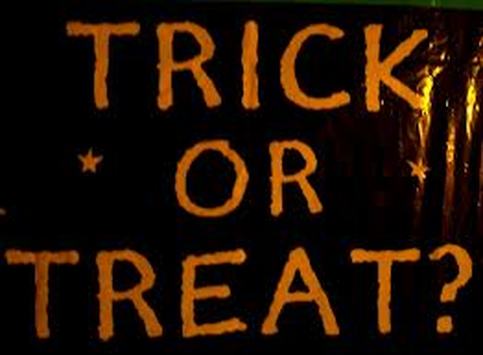 Some Fun Facts About Halloween:

Meanwhile, back in the new world, the settlers were all Protestant and Halloween was technically a Catholic holiday. The original colonists in this country found ANY celebration immoral, especially a Catholic one. In fact, celebrating Christmas in the Massachusetts colony was once illegal, punishable by banishment or death.

After the American Revolution, Halloween still never really caught on in America. Most of the country was farmland, and the people too far spread out to share different celebrations from Europe. Any chance to get together was looked forward to - barn raisings, quilting bees, taffy pulls. Eventually, a fall holiday called the Autumn Play Party developed. People would gather and tell ghost stories, dance and sing and feast and light bonfires. The children would stage a school pageant where they paraded in costumes.

The Autumn Play Parties lasted until the Industrial revolution.  After that, the majority of Americans lived in cities and had no need for such get togethers. By the end of the Civil War, only Episcopalians and Catholics celebrated All Saints' Day and Halloween, and the two religions combined made up less than 5% of the population. Concerned about letting a part of their heritage fade away, the the two religions began an aggressive campaign to put those two holidays on all public calendars. In the late 1800's there was a move in America to mold Halloween into a holiday more about community and neighborhood "get-togethers," than about the supernatural. .At the turn of the century, Halloween parties for both children and adults became the most common way to celebrate. The first year All Saints' Day and Halloween showed up on the calendars, the newspapers and magazines made a big deal about it. Suddenly, everyone knew about Halloween and began celebrating it by lighting bonfires and having masquerade parties. The first official citywide Halloween celebration in the United States, occurred in Anoka, Minn., in 1921. In the 1920's and 30's Halloween became a secular but community centered holiday which was celebrated with parades and town wide parties. By the 1950's vandalism had to be brought under control and by this time Halloween was more of a child's celebration. Treats were handed out in order to prevent tricks like lawn rolling at each home. Those traditions have made Halloween the country's second largest commercial holiday to the tune of more than $2 billion spent on candy each year.

Today, Halloween is once again being celebrated as an adult holiday or masquerade, like Mardi Gras. Men and women in every disguise imaginable are now participating in parades. Many parents decorate their homes and yards, dress in costume, hand out candy at their door or go with their children as they collect candy.

And despite  its origins, today it has nothing to do with evil, devil worship, satanic forces, etc.  It's just good clean fun